“the end of the colony”
It's Thursday, the end of my Route du Rhum is approaching, finally we hope, I'm counting the days, but it's also the time when we think about returning to land. It reminds me of that time when, as a child, my parents sent my big brother and me to a summer camp, every year in July.
So the tears come to me (true), this bit of nostalgia thinking that it's over, we're going to leave the friends (the flying fish), the staff who yell at us and who guide us with whom we spend beautiful evenings ( my rigging, my boat), the flirtation with the cute girl in the group (the Atlantic swell), the relou of the gang who annoys the world (the crossing of the Bay of Biscay) but which in the end is not so bad, this environment of freedom without parents, alone, my Atlantic…
What makes a part of us not want to go there first and then not want to leave either? The attraction of the void? Looking for new experiences? Strong feelings? Do you want to (re)find yourself?
Because the Route du Rhum is a bit like the camp. On paper it's great, we're going to have fun with friends and lots of activities. But the reality is quite different, as soon as you get on the bus to leave. The galleys begin and friendships are born. We laugh, we cry, we're nostalgic, we're overjoyed, we're kidding, we want more.
So, are we going there this summer in camp? Are we diving in the Atlantic in November on this big boat? And on November 4, we still have the balls to leave, to leave his daily life, his friends, his wife and his two boys. We know that we're going to hell, that we're going to be (very) sick, that we're going to have to tinker, that we're going to ch… that we will be exhausted, that we will hurt ourselves, that the boat is heavy, that the maneuvers are long… and in the end it is addictive. We had a blast. Memory is selective.
So parents, will there be a next camp? We're going back in 4 years?
Romain on the Atlantic, 1000 nautical miles from the finish 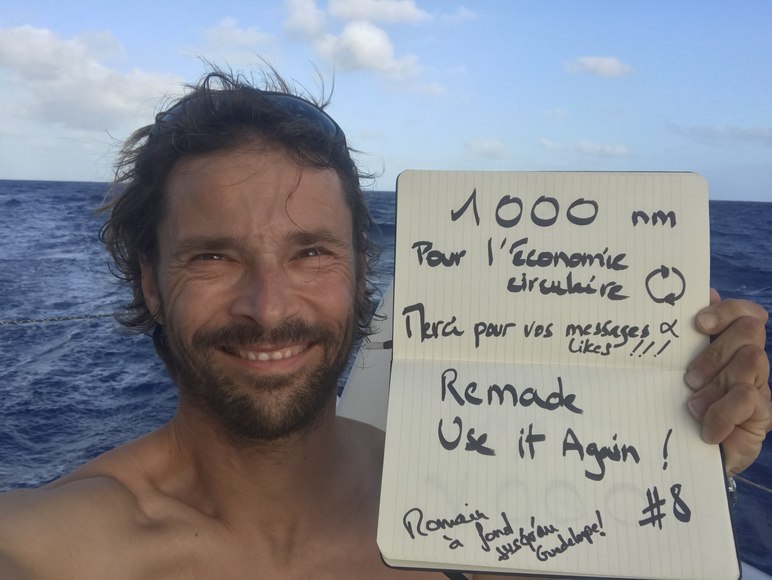