NEWS: Arrival of the World Tour!

Romain Pilliard, the skipper of the TrimaranUse It Again! team by Extia arrived this Tuesday, August 9 at the end of the day in La Trinité-sur-Mer after a 216-day adventure on the Upside Down Round the World against the prevailing winds and currents. On the last leg between Cape Town and La Trinité-sur-mer, the navigator had taken on board his 16-year-old son Titouan. Throwback to a beautiful day.

The emotion was palpable on the quays of La Trinité-sur-mer last night. The public, family, friends were there for the outcome of an incredible adventure full of twists and turns, which began 216 days ago.

All afternoon after the symbolic crossing of the finish line of the Round the World Reverse between the island of Groix and Lorient from where Romain Pilliard set off around the world on January 4, the emotions of the skipper ofUse It Again! team by Extia have done the roller coaster. Between excitement, joy, fatigue and satisfaction, it was on the verge of tears that Romain moored his faithfulUse It Again! team by Extia, a 23-metre Ultime trimaran, proud to have succeeded in completing its Round the World Tour at all costs. After the accident in Ushuaia, many would have given up. Not him. The objective of this Reverse World Tour, beyond the sporting aspect, was to convey a message. That of change, that of the circular economy and the protection of the ocean.

The words of Romain Pilliard on arrival:

«I thought about this day for a long time… What a beautiful moment of sharing! It is a record that has turned into an incredible human adventure. A few hours after the accident in Ushuaia, we decided with Aurélie, my wife, that it could not stop there. And I think we managed to write an even better story. What matters most is our commitment with Use It Again!, which has lasted for 6 years for the circular economy and the protection of the ocean. We must act, alert to leave a livable planet for our children. We can make beautiful projects by being reasonable, by remaining sober and I have the impression that sobriety is a word that is increasingly coming into the vocabulary in general. We can't go on like this, we're trying to show some direction with Use It Again! by Extia. Throughout this adventure, there have been ups and downs. I felt very alone in Ushuaia and in the Coral Sea in Papua New Guinea. I never liked departures, I was served with all these stopovers! The last leg with Titouan on board was the easiest. After the accident, we thought it might be nice to propose to him, it's a nice message for the younger generations. To show them that we are also fighting, that we are all going to have a job to make things happen! We are not all irresponsible and we must be positive for all these young people who have the future ahead of them.»

Titouan Pilliard, 16, son of Romain, Children For The Oceans ambassador:

«It was a great experience! I will never forget the first offshore surfing in 20 knots of wind, the boat gliding at 28 knots with the sunset... These are unique feelings of freedom. I realized that offshore the ocean is not the same. It has nothing to do with what I've been through so far. It was also difficult at times because I am a heavy sleeper and I was sleep deprived! Twenty-five days at sea is a long time. I have always been proud of my dad's projects but after having lived the last stage with him, I am even more proud of him! » 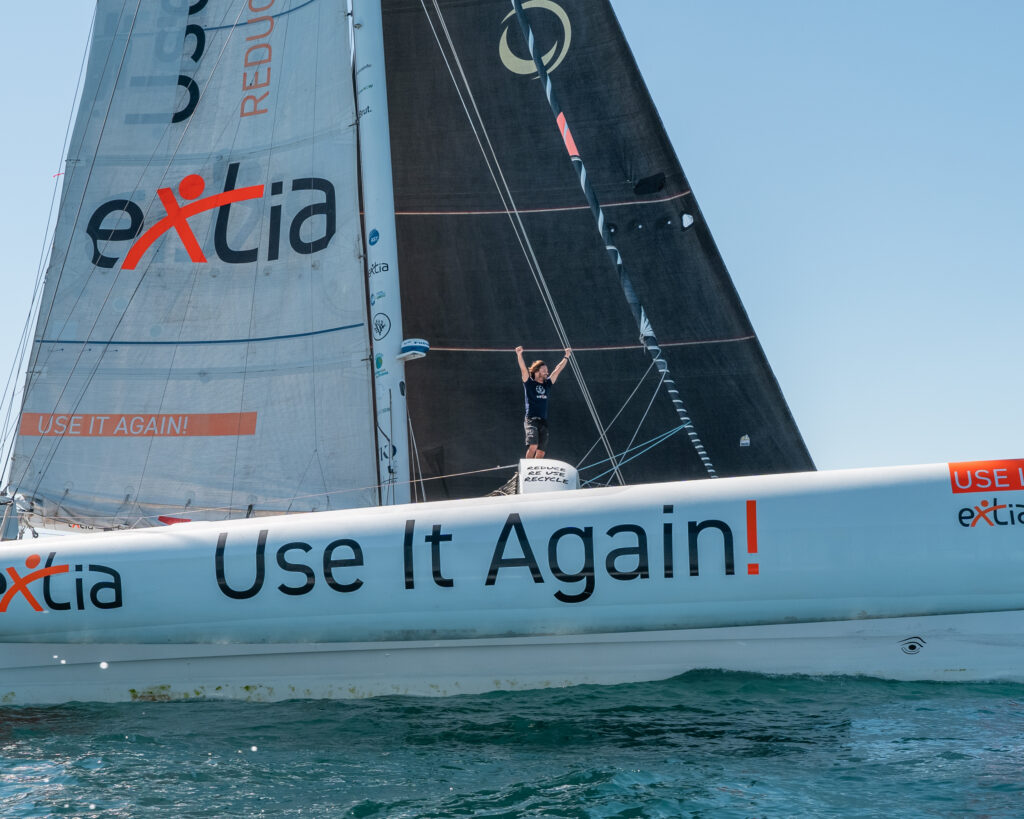