Leaving Reunion Island on June 21, Romain Pilliard, skipper of the Trimaran Use It Again! by Extia and his teammate Pascal Riera, arrived this Thursday morning in Cape Town in South Africa, the last stage of the Round the World Upside Down before returning to Brittany.

Against all expectations, the weather turned out to be milder than expected over these 2,300 miles on the Indian Ocean. ” We had left Reunion in a mouse hole, imagining stopping or putting ourselves on stand-by to let the depressions that stood in our way pass. In the end, we only had 48 really difficult hours, a sea of ​​3 meters in front and strong winds. We feared for the mainsail, all of whose slats were broken. The objective was above all to bring Use It Again! by Extia safely without damaging the equipment before making some repairs to the sails before heading up the Atlantic. Mission successful.”

A light breeze of 12 knots, a sunrise and magical colors on the famous ” Table Mountain “, emblematic of Cape Town, everything was perfect for this arrival in South Africa. Already on Wednesday, Romain and Pascal had savored the passage of Cap des Aiguilles in conditions worthy of sailing on Lake Geneva. ” After Cape Horn, Cape York in Australia, the passage of the Cape of Agulhas was the third and last great Cape of this Round the World in Reverse. I was very moved. I took full advantage of it, we had the visit of whales, dolphins and I was very happy to share this with Pascal. We were so expecting difficult conditions that there was a certain euphoria on board. It seemed unreal to us… This Round the World is difficult, I really give the maximum to complete it and for a few days, I tell myself that there is definitely a lucky star watching over this beautiful project.“, conclut le skipper de Use It Again! by Extia.

Upon arrival at the pontoon, the North Sails Cape Town teams recovered the sails of the trimaran to start work today and allow Romain to leave as quickly as possible and complete this incredible adventure around the world. 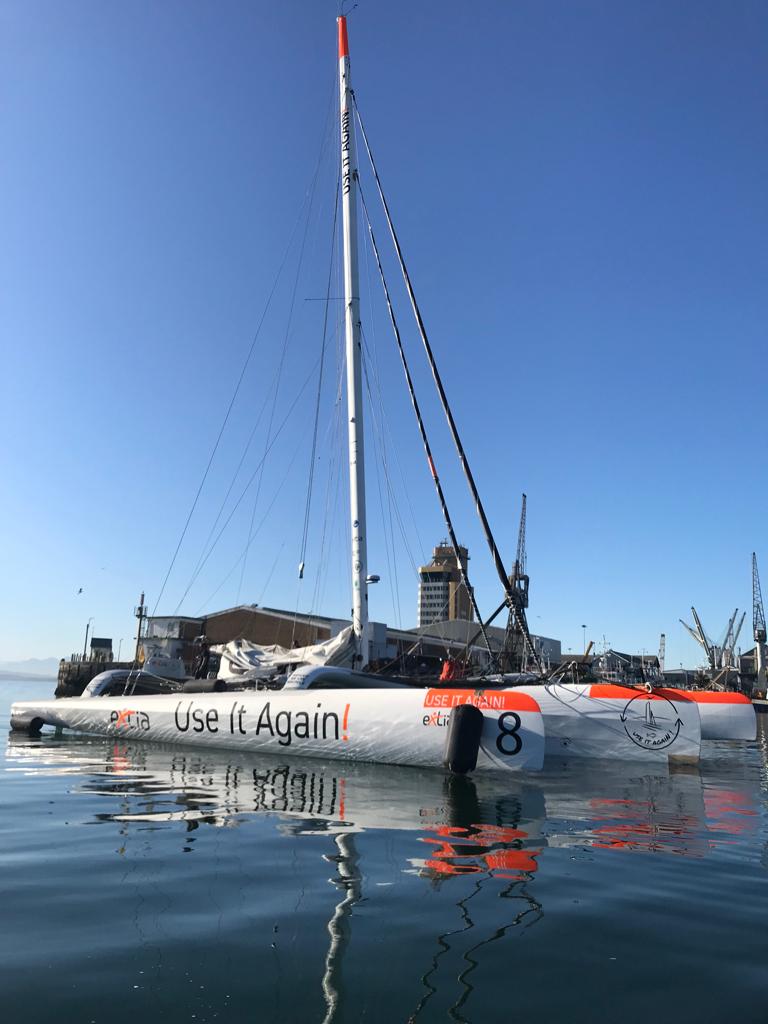