Arrival scheduled for Tuesday August 9 in La Trinité-sur-mer
After 211 days and 34,000 journeys on the Round the World Upside Down against the prevailing winds and currents, the trimaran Use It Again! by Extia, skippered by Romain Pilliard is expected on Tuesday August 9 in La Trinité-sur-Mer. On this last leg between Cape Town and Lorient, where the circular economy and ocean protection trimaran will symbolically cross the finish line, Romain Pilliard took his 16-year-old son Titouan on board for an ascent of the 25 day Atlantic. Use It Again! by Extia is making progress this evening at 200 miles in the North of the Azores, last ETA: Tuesday August 9 at the start of the afternoon.

Never give up!
If Romain Pilliard set off to try to beat the Round the World Record in Reverse on January 4, an accident in the Patagonian canals will have got the better of the sporting ambitions of the skipper of Use It Again! by Extia but not its determination to complete this Round the World at all costs. After several weeks of work to repair the trimaran in Ushuaïa in extreme conditions, the skipper set off again around the world on March 16. Between Ushuaia in Argentina and Lorient, the trimaran Use It Again! by Extia made a stopover in Papeete in French Polynesia, in Port Moresby in Papua New Guinea, then on Reunion Island and Cape Town in South Africa, a succession of scheduled stops and improvised pit-stops to caring for this legendary trimaran which will celebrate its 20th anniversary in early 2023. Through resilience and self-sacrifice, the Record has turned into a constant adventure with single-handed or double-handed stages and stopovers during which Romain Pilliard met with environmental protection associations and children to raise their awareness of the circular economy and the protection of the ocean.

The Atlantic in an Ultimate trimaran at only 16 years old!
To complete the beautiful story of this Around the World in Reverse, Romain Pilliard took on board his 16-year-old son Titouan, a member of the Children for the Oceans association. A one-of-a-kind experience for Titouan, keen on offshore racing, a seasoned competitor and for Romain who was able to pass on his taste for the open sea to his son. For 20 days, the eldest of the Pilliard children has proven to be an excellent crew member and has been leading his watch like any other sailor. Sailing more than 5,900 miles on an Ultime trimaran at 16 years old, unheard of! A few days before the finish, Titouan is already making his dad proud and the two sailors take advantage of every shared moment before crossing the finish line between the Kerroc'h lighthouse in Lorient and the Pen Men lighthouse on the island of Groix. They will then reach La Trinité-sur-mer, the home port of the trimaran Use It Again! by Extia.

More info on the arrival device no later than Monday morning depending on the ETA. 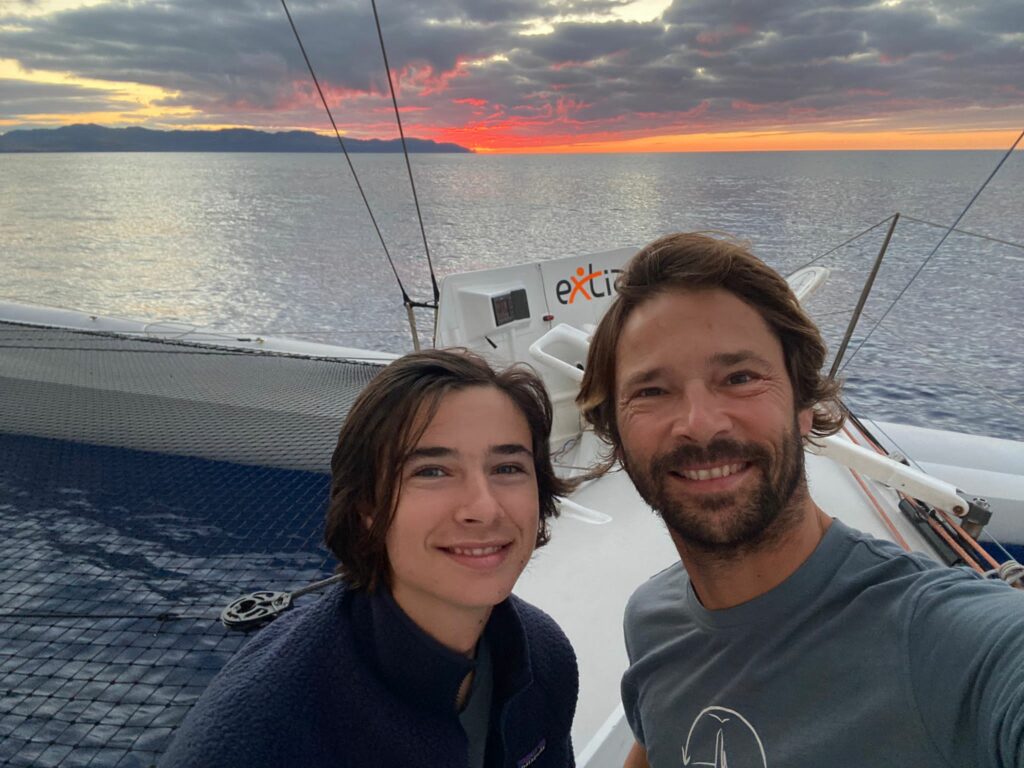