Mood ticket..A few hours before the outcome of the Round the World Inside Out, Romain Pilliard, skipper of the Trimaran Use It Again! by Extia looks back on the objectives of its World Tour for the protection of the Ocean and the development of the circular economy. It warns of the urgency to act as the situation, in France in particular, has deteriorated significantly since the start of this Round the World (January 4). Arrival scheduled for this Tuesday, August 9 around 5:30 p.m. in La Trinité-sur-Mer.

« While a large part of the planet suffers from the heat, more than 40 degrees in France, 53 degrees in Iran… I am finishing today with my Around the World Upside Down aboard my trimaran Use It Again! by Extia. A World Tour against the prevailing winds to alert and show that we must change direction. Changing our consumption patterns and even our way of living, of thinking.

I left in January for a Record attempt but the human adventure took over the sporting competition. And it's just as amazing! This is what has guided me since the origin of Use It Again! in 2016 and the second life given to this legendary trimaran which was in a state of abandonment. Commit myself to participate in my humble height to save the human being in the midst of this chaos on our planet. I have sailed the seas of the globe in an unprecedented way, and my navigation and the stopovers have reinforced my commitment. The state of emergency in which we find ourselves is not taken into account, not to its proper extent. We are way behind in the face of the climate emergency. Late in political decisions, and in educating people to live in harmony with what the Earth can endure. We are currently experiencing uncontrolled episodes of drought, fires… And that's just the beginning. Everything is going to get worse, and you have to tell yourself that everything is linked. So today, if I am proud to be Cape Hornier from East to West, to have passed the 3 mythical capes, to be the only skipper to have crossed the blue planet from East to West, on an ULTIMATE trimaran, I hope all this can be useful!

We are committed with Use It Again! to develop our awareness and education actions in France and abroad in the coming years, because IPCC scientists confirm it, it is absolutely necessary to change the behavior of populations through education. We can never do too much in this area. Our action in ocean racing is another way of sailing, at the highest level, sometimes on different routes. A much less impactful way of sailing, much more respectful of the environment, much more sober. We apply the principles of the circular economy in each of our decisions, and it can be seen on the boat. What we have repaired, recycled, upcycled… my boat is a concrete example of the application of the principles of the circular economy.
For now, I'm enjoying the last hours of sailing with my eldest son, 16, with whom I wanted to do this last stage from Cape Town, as a message sent to future generations: there are adults who committed and which will not leave you alone, let's all act together! See you soon on dry land Romain. 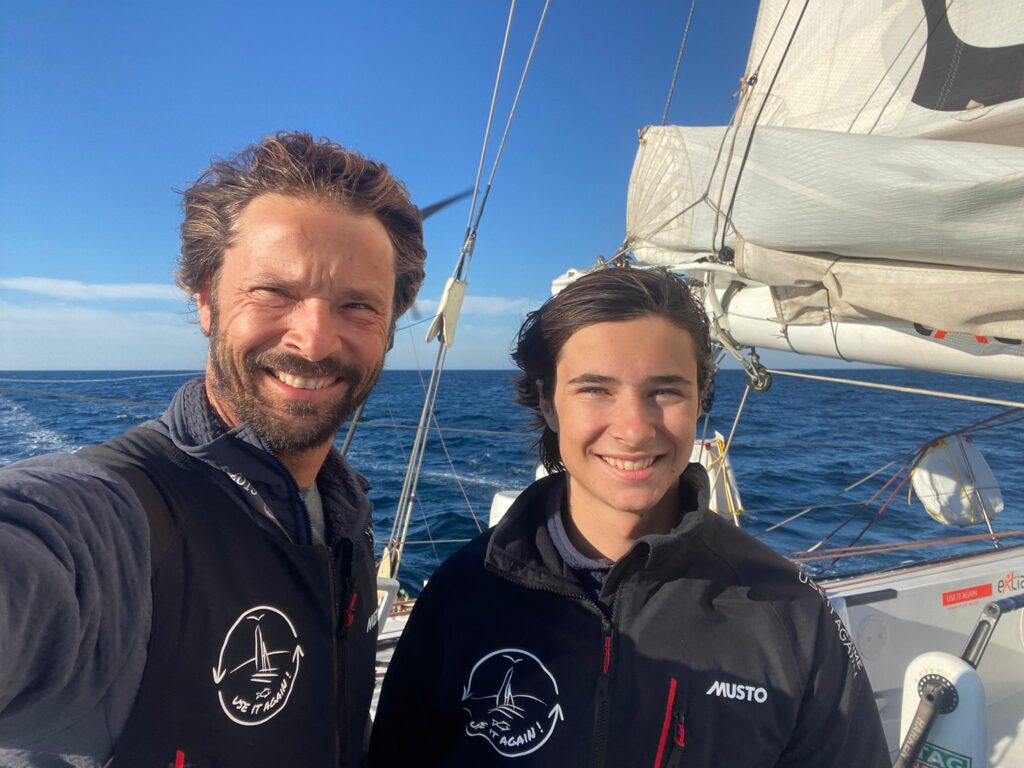