At 12:55 p.m. on Thursday, February 3, Romain Pilliard and Alex Pella managed to cross the mythical Cape Horn from East to West aboard the trimaran, Use It Again!, despite extremely difficult conditions. The two sailors fought well upwind, tacking for 36 hours against very heavy seas and in 30 to 40 knots of icy wind. The difficulty of passing Cape Horn from East to West is definitely not a myth! This is another successful moment for the Franco-Spanish duo and their circular economy trimaran, during this attempt to set the Westabout World Record Attempt, and achieved against the prevailing winds and strong currents, which began on January 4 in Lorient.

Pride and happiness for the two Cap-Horniers!
Although Alex Pella has already rounded Cape Horn "upright" four times, this is the first time that Romain Pilliard has approached this mythical cape, as well as, the first time that he has sailed in such distant latitudes (56 degrees South). After 29 days and 18 hours of sailing from the starting line of this Westabout World Record Attempt (located between the island of Groix and the Kerroc'h lighthouse), they are now here at "Cap-Horniers," and ready to attack a new ocean - the Pacific.

“We are living a mythical moment of this course! We have just passed Cape Horn less than 30 days after leaving Lorient-Ile de Groix. We have passed the longitude of Cape Horn and it is an exceptional moment. I am very moved because it is my first Cape Horn! This is the dream of many sailors around the World. We have had some pretty tough conditions on Use It Again! upwind for quite some time since we have been on the Round the World Reverse from East to West. Cap-Hornier from East to West has another flavor…it's a lot of emotions, with an indescribable happiness experienced around this island, which is the southernmost land of Latin America before Antarctica.… The road continues on this Westabout World Record Attempt ”, rejoices Romain Pilliard.

“I am very happy, passing Cape Horn always brings a lot of emotions, even when you have already passed it 4 times! Moreover, I believe that if I crossed it 1000 times, it would be exceptional each time because it is a place rich in maritime history. It is the passage between the Atlantic and the Pacific…a lot has happened in these waters. This excites me! It was very difficult to cross the point with he currents and the headwind…we made square edges and we succeeded. There is no doubt, it is easier to pass this Cape Horn upright!” Explains Alex Pella, co-skipper of the trimaran Use It Again!

A look back at a 36-hour epic moment under high tension
“After 48 hours of standing-by north of Tierra del Fuego in order to let the first storm pass over Cape Horn and prepare the trimaran for this delicate round-the-world stage, Romain Pilliard and Alex Pella set off on Wednesday morning in the Strait de Lemaire, thus beginning a long and difficult descent towards Cape Horn. "We have 44 knots, the sea is rough, 4 meters of hollow, and in short, it hits hard so we grit our teeth and hope that the boat does not suffer too much", Romain sent to his team. After a first edge in the Strait of Lemaire, the sea is impassable, they turn around towards the coast, and after discussion between the two men, they decide to go there anyway by tacking to the coast to have less open deep sea. Living conditions are particularly difficult for sailors. “We live like animals…we sleep sitting up in the beanbag with the survival blanket to keep warm. I have 7 layers on me and I'm freezing. It's intense ! You come out of the siesta and you say shit to yourself, this is still happening”explained Romain last night.

As for the immediate future? Hard to say again! A huge depression is coming from the west in the South Pacific, with sea and wind conditions that would seriously hamper their progress. Romain and Alex, accompanied by Christian Dumard, their router on land, will again make choices in the hours to come, the possibility of seeking shelter along the coast is not excluded. To be continued… … 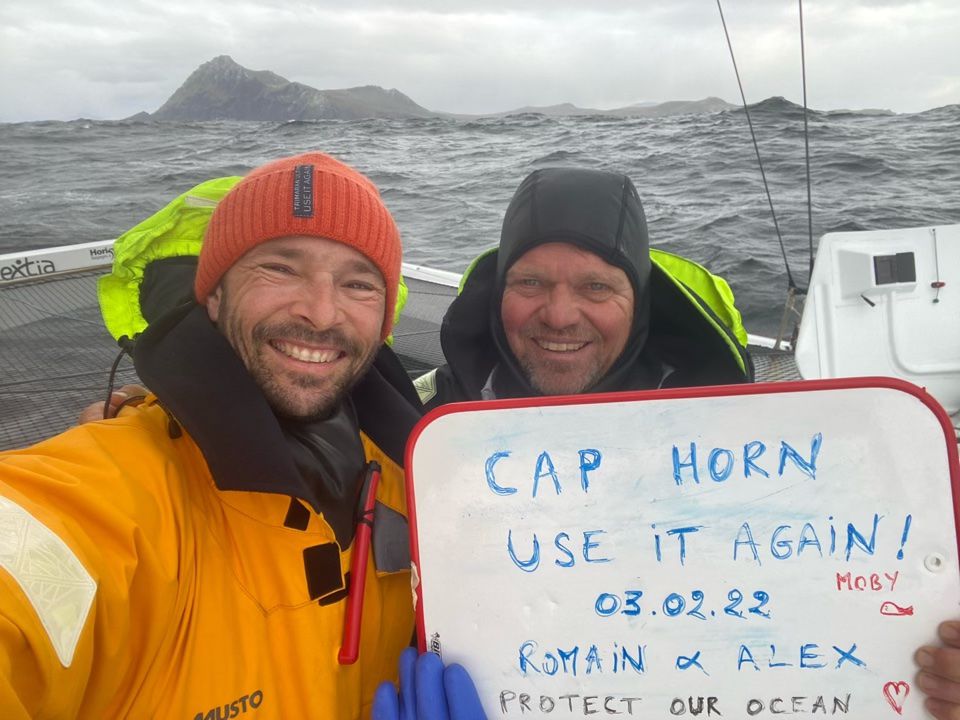