A Record and a first global mapping of ocean noise pollution

20 May 2021
A Record and sound mapping of the Oceans
This autumn, Romain Pilliard will start in a pair on the trimaran of the circular economy to attack one of the most difficult records of offshore racing, the Westabout around the world record, against the winds and the prevailing currents. For nearly four months, on a rarely used sea route, the skipper ofUse It Again! will use the miles travelled to support the work of Olivier Adam, a scientist specializing in cetacean noise emissions and ocean noise pollution. Thus Romain will collect data on the presence of cetaceans in areas never before explored and will carry out a mapping of the soundscape of the oceans, a world first!
The skills of each at the service of the Ocean
Ambassador ofRespectOcean since 2019, Romain Pilliard has been meeting Olivier Adam*, Professor at Sorbonne University, bioacoustics researcher, specialist in cetacean noise emissions, last November during a screening-debate on the theme of underwater noise, organized by the Association of Raphaëla Le Gouvello. The protection of the Ocean is – together with the development of the circular economy – at the heart of the concerns of the teamUse It Again! «This collaboration with Olivier Adam started from a very simple observation, scientists are sorely lacking in data to identify cetaceans especially in the most remote areas, but I am just about to sail in some parts of the ocean where few boats venture. This is a unique opportunity to collect data around the world,"says Romain Pilliard. 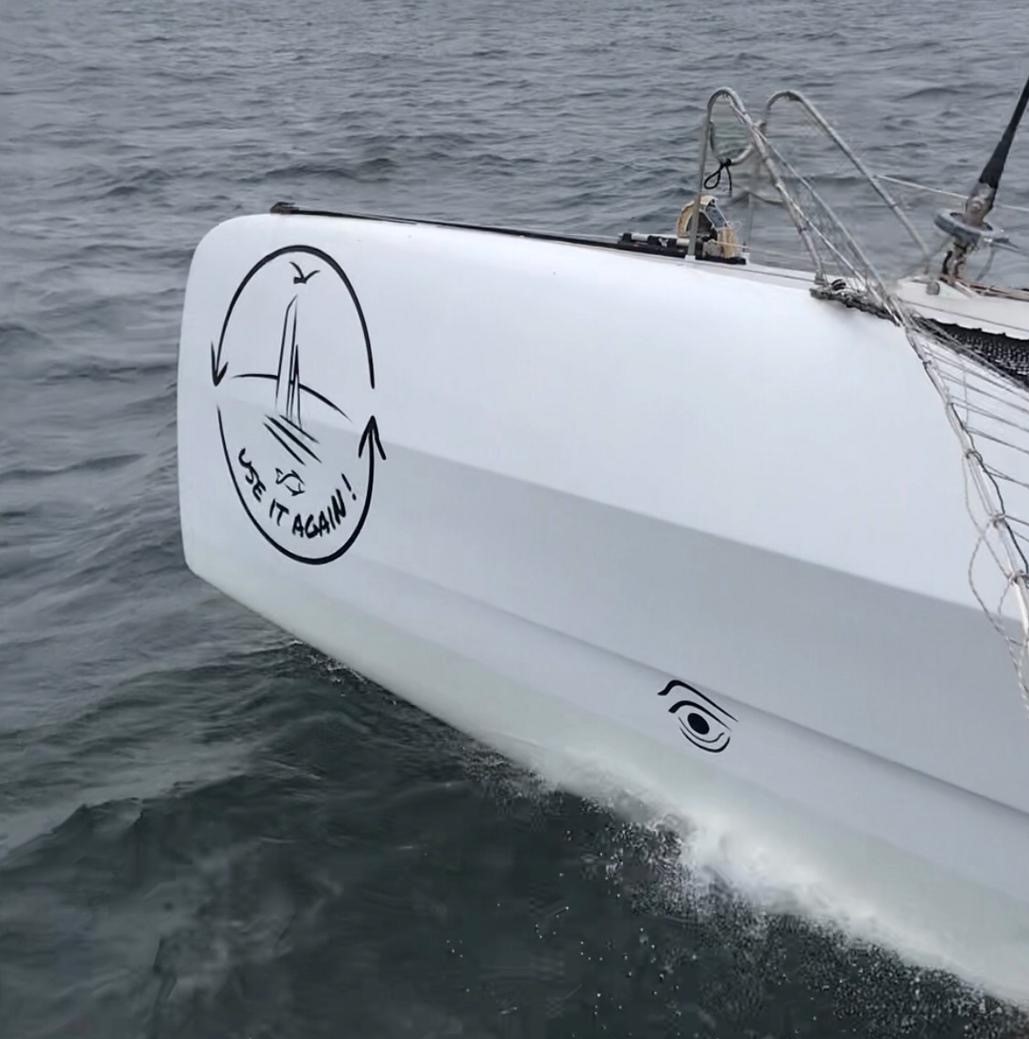 The eye of "Moby" has always watched over this legendary trimaran.
Use It Again! is ellen MacArthur's former trimaran. For the record, "Moby" was the nickname that the British sailor had given to the boat during her circum tour of the world in 2005, convinced of the protective aura of the cetacean whose benevolent eye sported the central hull. A few days before the departure of the Route du Rhum in 2018, Romain Pilliard – by superstition? – had in turn, affixed moby's eye on the bow ofUse It Again!.

On this Westabout around the world tour, he will listen to his congeners!
The trimaranUse It Again! will thus be equipped with underwater microphones, currently in the test phase. «I am very happy that Romain can collaborate with us. His work will consist in combining visual and especially acoustic observations because some cetaceans are ratherdeep-sea species such as sperm whales or beaked whales, and therefore more difficult to see on the surface. With the acoustics, we can know if they are present in the area, without even having seen them. We will also look at their behaviour, in particular whether or not they are attracted to trimaran. " explains Olivier Adam. The on-board microphone systems will be positioned in front of the drift and in the wake of the trimaran using a dedicated pole. Thus the presence of cetaceans can be detected up to 30 miles on a clear day around the position ofUse It Again! throughout his Westabout around the world record."These thousands of hours of recordings will also make it possible to map the soundscape of the Use It Again course! to measure the impact of man on the Ocean by making comparisons between the oceans and determining the different noise nuisances between areas with maritime traffic and areas without " adds Olivier Adam.

In parallel, a second project is being studied, the skipper will regularly take samples of seawater which will then be used, once filtered, to determine the presence of cetaceans by looking for traces of environmental DNA (DNA that can be extracted from environmental samples such as water or land).
*Curator of the Baleinopolis exhibition held from 28 September 2019 to 13 March 2020 in Paris, Olivier Adam is also the author of two books on cetaceans and has published more than fifty articles in scientific journals. His current scientific projects focus on mother-calf interactions in humpback whales, the ethoacous study of sperm whales and the description of underwater soundscapes.