Each person at his own pace !

For his first Route du Rhum and his first race aboard the Trimaran Remade-Use It Again, Romain Pilliard, like the entire fleet, was not spared. After a cautious start, the skipper has been facing difficult weather conditions since last night with gusts of wind at 45 knots upwind and already very rough seas. 500 miles from François Gabart (Macif) leader in Ultimate, Romain Pilliard continues his race at his own pace. The objective is to let the worst of the depression pass and to hunker down while waiting for better conditions...

Joined this morning by the organization of La Route du Rhum-Destination Guadeloupe during the official session, the skipper of Remade-Use It Again was confident in his mount and had a reassuring voice.

“Right now, it’s a bit Verdun. We had to cross the front. I got caught in the soft spot after Ouessant. It was not planned initially. Yesterday, there was as little wind as there is a lot today! I constantly have between 30 and 40 knots, I'm upwind to cross this front, it's a bit violent but that's fine. The boat is fine. The guy is a little weak, I'm still a little sick but I'm in good spirits. The conditions, I expected. It's not the easiest start to the Route du Rhum, but you have to deal with it! I think there are a lot of breakages, abandonments or stand-by in the ports but I tell myself that it's a good boat and that it will pass. The idea is really to play it safe, the road is long. There, I am under 3 reefs alone. I have nothing ahead. I'm progressing between 7 and 10 knots, I'm staying cool! We still have slaps at 45 knots, I manage to drink, I hydrate but I don't eat much!»

One race, two atmospheres
It should be remembered that the trimaran Remade-Use It Again was designed in 2003 for sailor Ellen MacArthur, who had completed her circumnavigation of the globe in 71 days in 2005. It was refurbished this year by the team of Use It Again according to the principles of the circular economy to participate in La Route du Rhum-Destination Guadeloupe. If the delta between the average speeds of Macif, leader in Ultimate and those of the trimaran Remade-Use It Again may seem important, we must not forget that these two boats were built 12 years apart. For Romain Pilliard, for whom this is his first solo experience at the helm of a giant trimaran, the achievement will indeed be to arrive in Guadeloupe to fly the colors of the circular economy with his partner Remade, European leader in iphone reconditioning. This is also the magic of the Route du Rhum: combining sport, performance and adventure to live and share beautiful stories. 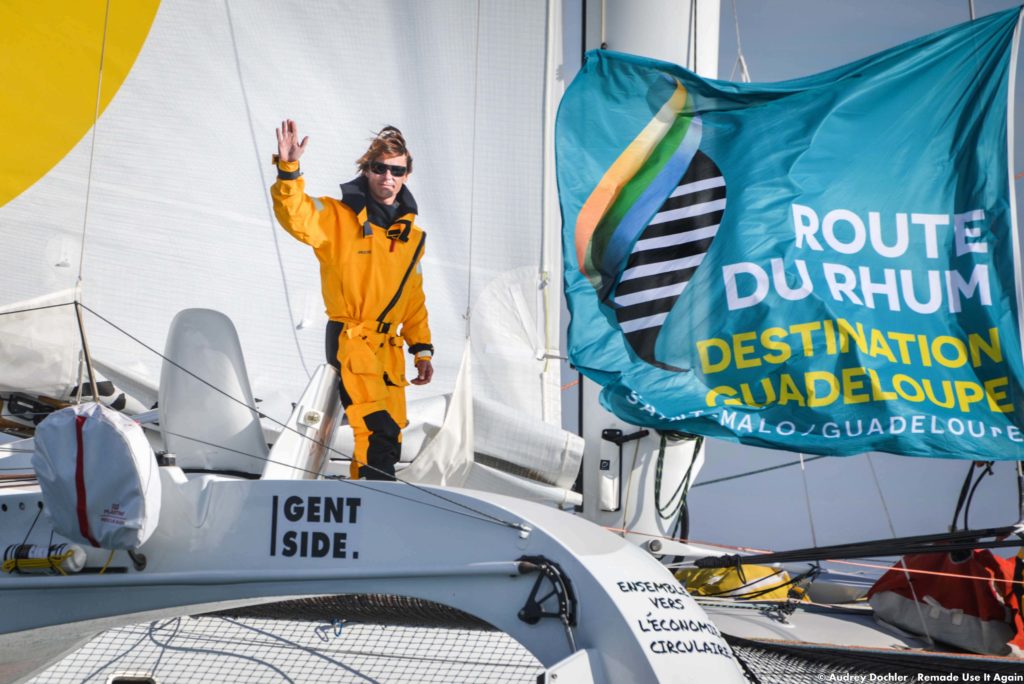 Photo : Audrey Dochler – Use It Again