The departure of Use It Again! in Lorient

Storming the Round the World Record Upside Down

Romain Pilliard and Alex Pella set off on Tuesday January 4, 2022 on the Backside Round the World Record. The trimaranUse It Again!,Ellen MacArthur's old boat, reconditioned according to the principles of the circular economy, crossed the starting line at 17 hours 36 minutes and 04 seconds between the Pen Men lighthouse on the Ile de Groix and the Kerroc lighthouse ' h in Lorient. This Round the World Tour against the prevailing winds and currents has never been successful in a multihull, a real sporting challenge for Romain Pilliard and Alex Pella.

«It's time to go», Launches Romain Pilliard moved a few minutes away from setting out on the biggest challenge of his life, while Alex Pella, more used to the exercise of a round-the-world start displays a big smile, impatient to attack this new record. The Spanish co-skipper had even brought the sun back in his bag, since the conditions were cool but ideal this afternoon on the pontoons of the Submarine Base in Lorient. Partners and families reunited, the duo ofUse It Again! team left the pontoons around 3:30 p.m. to warm applause.

Romain Pilliard, skipper Use It Again!: «We want to go there, it's the right time! We leave in good conditions. We're going to quickly have 20-25 knots of wind at the end of the day before crossing a zone of slack in the night, so there will be a lot of maneuvers in the hours to come. We're leaving "safe" because before beating this symbolic time of 122 days held solo by Jean-Luc Van Den Heede, we're leaving above all to finish this Round the World and establish a reference time for double-handed and multihulls! It's quite a challenge to leave for more than 100 days at sea, the length will be an exercise in style but I feel in perfect symbiosis and safe with Alex. I also want to take care of this boat, it's an exceptional trimaran, it has already sailed twice around the world. »

Alex Pella, co-skipperUse It Again! team : «It's a great window because it allowed us to spend Christmas with the family (laughs), and above all, the conditions are good, it's a good balance between speed and reliability. You won't have to pull too much on the boat from the start! Becoming the first sailor to hold the Jules Verne Trophy and the Wrong Round the World Record, I have to have it in the back of my mind, but the goal is as always to sail clean, to have a good time on the water. 'water and keep the boat running well. "

In a north-north-west flow of around twenty knots, at sunset, the bows of the trimaranUse It Again! team crossed the starting line at 17:36:04 between the Pen Men lighthouse on the Ile de Groix and the Kerroc’h lighthouse in eastern Lorient where the whole teamUse It Again! team surrounded Claude Breton, the official timekeeper of the WSSRC and Christian Dumard, router, meteorologist and third man of the team. Romain's three children launch a last "kisses dad,good luck Alex"On the VHF and the trimaran disappears behind the Ile de Groix. In front of Romain Pilliard and Alex Pella, a 21,600-mile round the world direct route but nearly 30,000 miles in reality. During more than a hundred days of racing, the Franco-Spanish duo are determined to show concretely that it is possible to think about performance and live exceptional adventures while minimizing its impact on the planet. 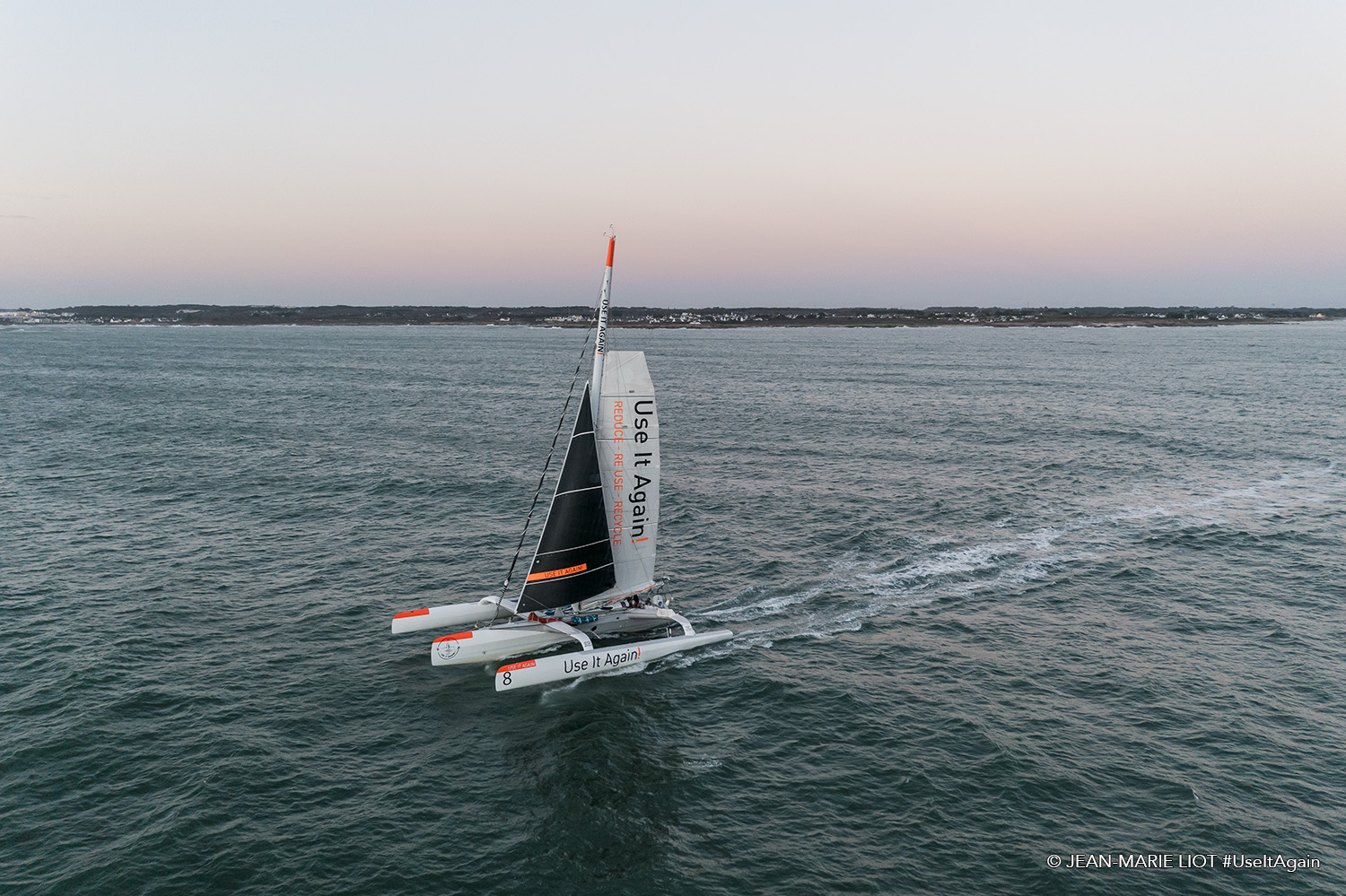 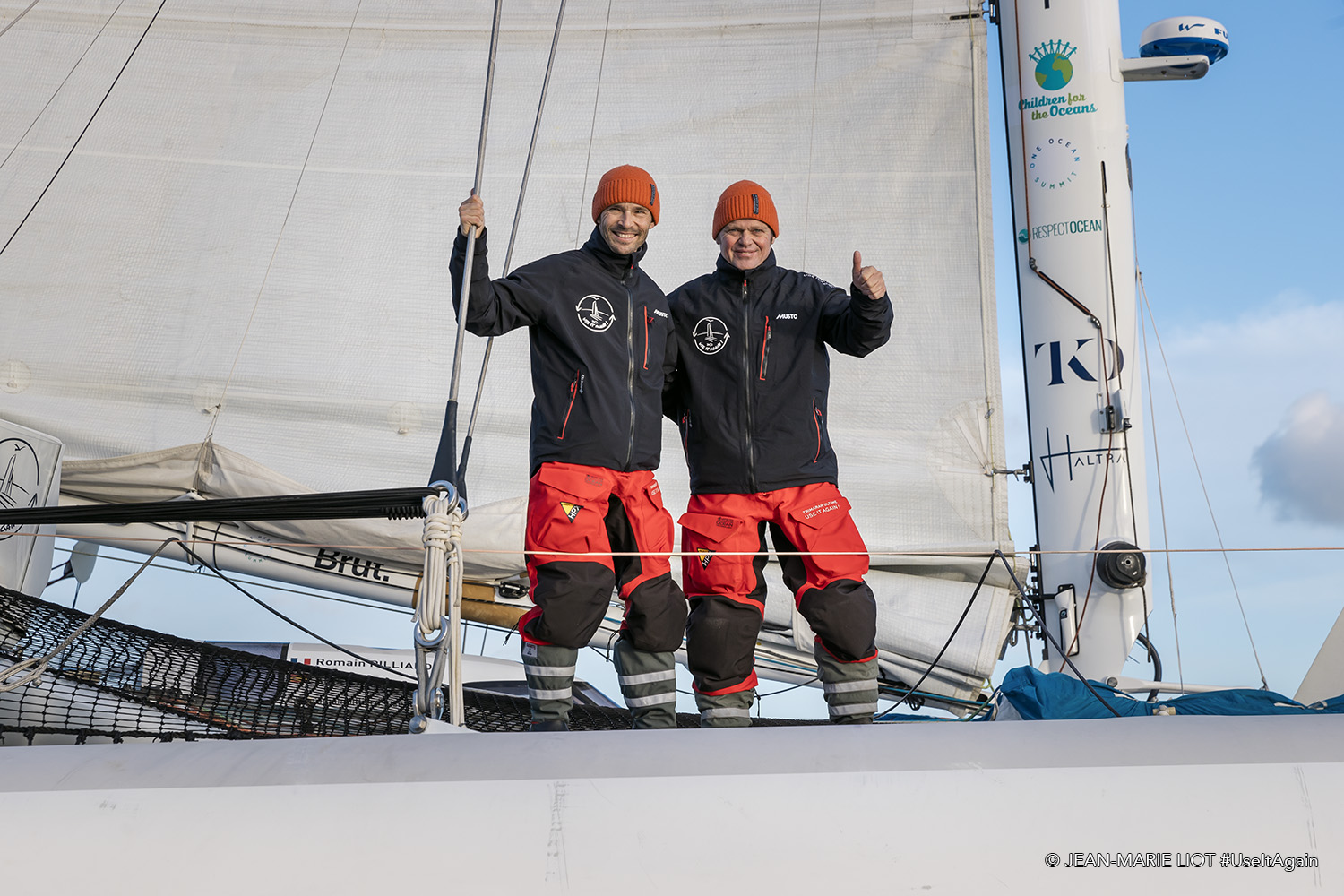