One month after the accident of Use It Again! team in Cook Bay during the Attempt of the World Tour Record upside down, the circular economy trimaran was repaired and put back into the water at Ushuaia. Decided todecidedTo bounce back and continue this Round the World against the prevailing winds, the navigator Romain Pilliard will start tomorrow on a course in three stages, some in doubles, others solo. The objective is to pursue the main mission of Use It Again! team awareness of the protection of the ocean and the promotion of the circular economy, if the record is over, the adventure and the mission, they, continue!On the occasion of this new beginning, the trimaran changes its name and now sports new colors, those of EXTIA, which reinforces its commitment and becomes Title Sponsor of Use It Again! team

The adventure Use It Again! team by Extia continue.
Seduced by this first part of the World Tour upside down and convinced of the need for the commitment of Use It Again! team on the topics of circular economy and ocean protection, the Extia Group – Consulting company specialized in IT, engineering and digital professions – already engaged in the adventure as a patron of the Endowment Fund sends a strong message by becoming today Title Sponsor of the trimaran Use It Again! team by Extia for the continuation of the World Tour à l'Envers and for the Route du Rhum, a mythical event on which Romain Pilliard will be entered in the Ultimate category next November."Despite the interruption of the record, what immediately marked me was the extraordinary motivation and resilience that Romain showed by immediately projecting himself into the rest of the adventure. The record is one thing, but what is most important is the message carried by this project. As a major player in IT, our digital footprint is obvious and we are very sensitive to it. The circular economy and environmental issues are very important topics for Extia, our employees and myself» explains Arnaud Frey, CEO of Extia.

«The exchanges with Arnaud Frey and his teams during this period have definitely confirmed our desire to go further together. Extia is a valuable support for our project. Through financial support that is obviously essential, but now also with the prospect of helping us improve our digital environment, which is essential to promoting the message of our missions. Seeing a partner become Title Sponsor in the aftermath of what many would have considered the end of the project, is a proof of trust and very strong commitment. We have demonstrated with my small team that nothing is ever impossible and even at the end of the world in a critical situation we have found the solutions to continue this World Tour upside down, proof of extreme resilience that pleased our partners " adds Romain Pilliard.

Continuation of the World Tour upside down with stopovers.
Despite significant damage to the boat following its grounding in Cook Bay last February, the skipper and the Use It Again! by Extia have made every effort to carry out a repair project in complicated conditions on the other side of the world. But impossible is not Use It Again! team Barely a month after the disillusionment of the end of the Record attempt of the World Tour upside down in doubles, Romain Pilliard is ready to leave no longer to fight against a reference time but to defend his commitment, that of moving the lines to protect the Ocean and promote the circular economy. «This project, this boat, is my whole life, I took partners, scientists, my team, my family and it was impossible for me to imagine losing this boat when we had given it a second life by re-it.cupscraping in 2016 to the state of abandonment. It is also impossible to envisage that the adventure stops at Ushuaia or de me retried to turn back to Lorient from where I left on January 4th " explains Romain. «We have done everything we can to restore it here at Ushuaiadespite damage to the structure, and this in a record time to leave before the southern winter, and we got there, it's extraordinary! We also decided to bounce back and rewrite a little the scenario of this World Tour with stopovers this time to take the time togo to meet associations committed to the protection of the environment, and continue our awareness-raising actions. We have a very rich network of project leaders for the protection of theOcean in particular with the association Respect Ocean. We will also intervene in schools with Titouan and Colas, my children who are themselves ambassadors of the children for the Oceans association."Among the major projects initiated at the beginning of the World Tour, there is also the realization of the first sound mapping of the Ocean in collaboration with the scientist Olivier Adam, the surveys will continue throughout the course. During the construction site in Ushuaia, an underwater camera was added to the hydrophone device already installed for the first part of the World Tour, in order to complete the sound study and add new data. Extia will also create the website dedicated to open source sharing of this data.

A new teammate and a great story.
For this first stage towards Polynesia, Christophe Colaris, Commander of the ship Le Lyrial of the Compagnie du Ponant will accompany Romain. A nice nod to history since Christophe and his team were among the first to help Romain Pilliard when he arrived in Ushuaia. The commander of the Lyrial made his crew available to the skipper of Use It Again! team to prepare the trimaran before it came out of the water and provided it with logistical means. In this extremely difficult moment, Romain was touched by the human qualities and enthusiasm of this long-distance sailor. «Christophe was really part of the success of the Use It Again adventure! To Ushuaia. 'is a good sailor, and even if it has not the experience of this kind of boat, I know that I will be able to count on him and I am happy to offer him this experience. It will be a great human adventure for both of us!»

The whole team of Use It Again! team by Extia would like to thank all its partners, patrons and supporters: Extia, Tikehau Capital, Haltra, Aqualung, Applied Satellite Technology, La Fondation du Ponant, Horizon Bagages à vivre, Tag Heuer, Solbian, MyDiTex, Pepper bay, the Vicbag group, La Maison du Chocolat, France Info, Brut. In adversity, they were able to respond and much more to allow the adventure to continue. 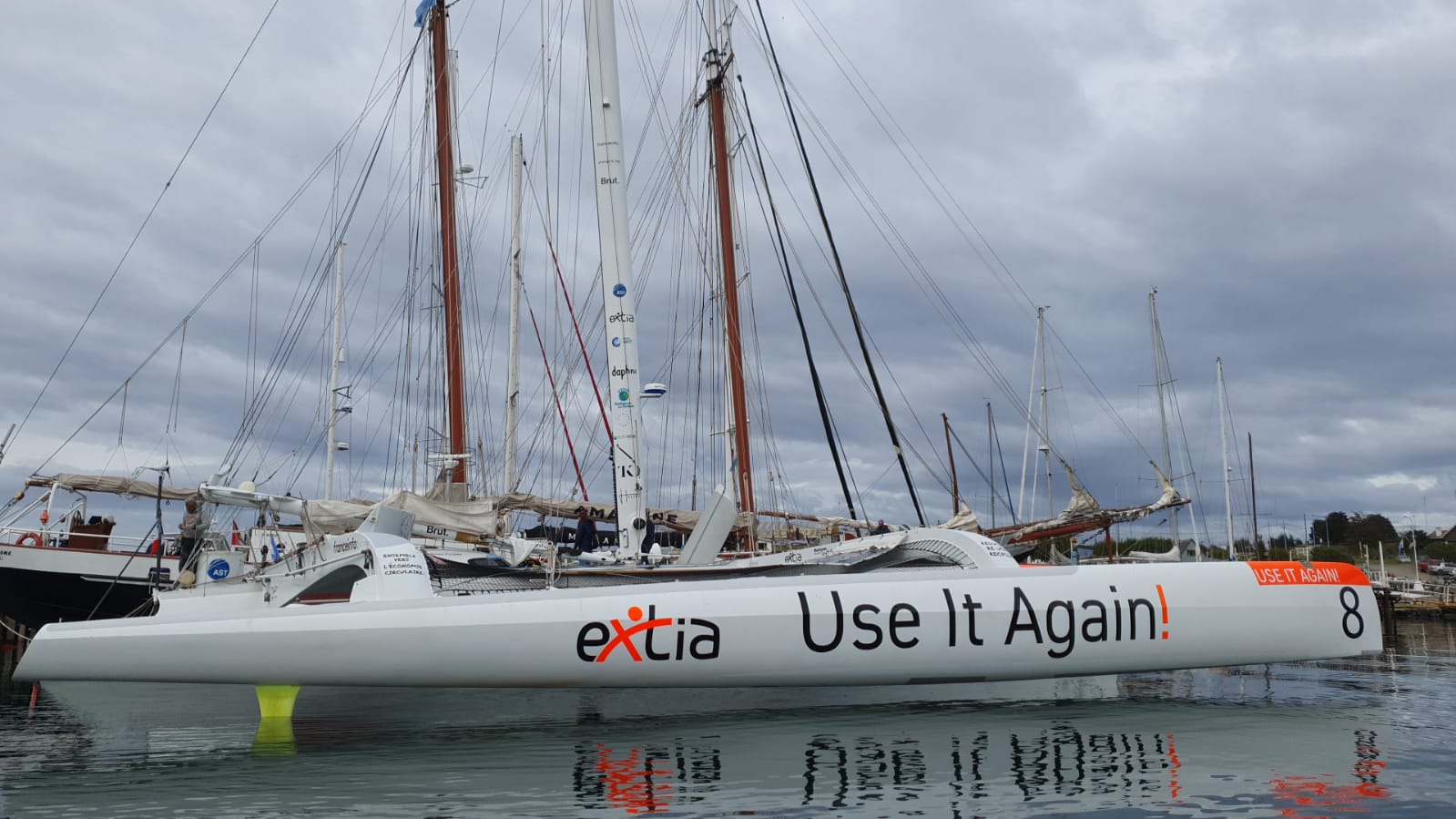